Not so much to wrap up here, but I'll link two entries I particularly liked. (Even if they liked the books better than I did!)

Rebekah Loper is a long-time fan of Brouwer--her first post describes when she met the author, and also explains exactly how these books are a retelling of previous series.

And Rebecca LuElla Miller had a very good post about the use of magic in Christian fiction.

Thanks for the tour, all!
Posted by Julie Bihn at 6:30 AM 2 comments

So if you read my review of Book One of Merlin's Immortals, The Orphan King, you can see it wasn't my favorite. I found the pacing and reveal of information (and storyline!) of this one much more compelling, though my rating doesn't portray the difference so accurately. 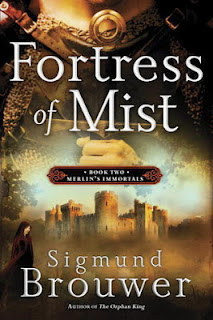 Ridiculously simplified summary: In 1300s England, Thomas, young lord of Magnus, is faced with war and threats from Druids. Can he somehow outwit enemies and overcome in another bloodless war?

Content: Priests are portrayed so negatively I, a Southern Baptist (a denomination hardly known for adoring Catholicism) got uncomfortable. Overweight people are again bad. There is some gruesome violence and quite a bit of cruelty to animals (including mice, bats, even a puppy, and this isn't all by the bad guys). Though in fairness, that all would've been pretty minor by 1300s standards. Still very light on the speculative element; I'm not sure I've seen any actual magic, as everything seems to be done by herbs.

Compelling: 8 out of 10. I felt like the mysteries in this one were much better revealed, and there was more of a focus on Thomas trying to do more compelling trickery for, generally, a good purpose (saving the lives of people). Seeing more of Katherine's viewpoint kept things interesting, too, and we start to see more of the stakes of what the bad guys are doing.

Characters: 5 out of 10. Thomas was more likable, though I'm not completely certain what his motivations are for not wanting people to die, since he threatens death on people (including an apparent old woman) often enough and I got no sense that he actually loves his people. Still, it's a fun conceit to see him try to get through a war without anyone dying. (He is less kind to animals this time around.) I found few other characters memorable, excepting Katherine, and I wasn't in love with all the developments involving her (see Gut Reaction).

Writing/editing: 9 out of 10. I did see one little line I thought was awkward, but no other problems. There were still points where I felt things got muddled, but overall I was able to follow the characters' motivations and the story flowed.

Plausibility/believability: 3 out of 5. I still felt like characters had some modern trappings--Thomas gives a very social conservative speech about making the needy do work for their food (if they can), so that they'll turn to seeking employment from private enterprise instead of accepting handouts. The janitor (?) character--who seems to be the only one remotely affiliated with the priesthood who is considered a "Christian"--sounds very much like a modern-day Evangelical. Again, I'm not a fan of what the Catholic church did in the 1300s, but I don't like to believe that basically all the priests were corrupt (and the implication that their flock wasn't saved).

Positive: 3 out of 5. Love the idea of bloodless battles. I do think people are more important than animals, but I squirmed at the animal violence, particularly blinding a mouse.

Gut reaction: 2 out of 5. We've established that I HATE when books end on a cliffhanger for no good reason except to make readers buy the next one. I didn't feel like this was a gratuitous ending like in the last CSFF book, but it still felt unfinished to me because of how it ended right where you'd normally put a chapter break.

More significantly I was extremely disappointed by (spoiler!)...

Katherine turns out not to be scarred at all, but rather, is in fact beautiful. I'd been looking forward to a story where a guy (granted, a guy I didn't find terribly likable) who claims to see beauty beyond skin-level, might eventually find a scarred woman beautiful. But no; she's perfect. That substantially cheapens the major religious scene in Book 1 where Katherine insists to Thomas that God is a God of love even though she's terribly scarred. ("I am accustomed to the covering of my face." She touched her bandages lightly. "This is not a curse. It is only a burden. After all, our time on earth is so short. And God is more interested in our hearts and souls than in our appearances.") Sure, easy to say, when you have no scars at all and are being cuffed around and called a freak as part of a spy act. Easy enough when you could always choose to take off those bandages and run away and get a fresh start in another town.

Recommended for: Fans of medieval stories, but maybe not Catholics.

*In conjunction with the CSFF Blog Tour, I received a free copy of this book from the publisher.

Check out the other participants in the blog tour!

Julie for the CSFF Blog Tour!

I'll preface this by saying that now I know how my mom feels when she reads fantasy...you know how some books just don't click with you? Well, now I can see why Mom doesn't "get" the genre, because I had trouble following this one. (Just glancing through the Goodreads reviews tells me I'm not alone, so I feel a little less stupid.) I also got to review these two books while dealing with an apartment flood, so that may not have helped so much. 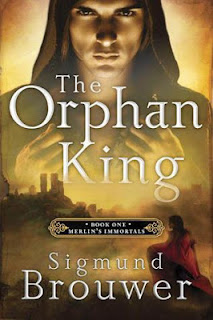 Ridiculously simplified summary: In 1300s England, an orphan is prophesied to take the impenetrable castle of Magnus. With no one but a knight, an eleven-year-old thief, and a mysterious, beautiful woman to aid him, can he succeed in his quest?

Content: Religion is for the most part portrayed negatively, until near the end, and there's still not much of it. Overall light violence (at least two folks get hit in the crotch, and at least one act appears much worse than it turns out to be). But until a turnabout in the end, I didn't notice the protagonist being at all bothered by violence. From the start, I was irritated by the negative portrayal of overweight people (who were historically, and noted in the book itself, considered attractive).

Compelling: 4 out of 10. I had a very difficult time discerning the motivations of the main characters. The reason I agreed to review this book was because it was on the blog tour (which is always fun) and the first few lines drew me in:


Amidst the shouting and haggling in the crowded and filthy market square, two women appeared to be examining the quality of spun wool.

Neither was a woman.

And neither cared about the wool.

Most of the rest of the book is nothing like this (in my opinion), focusing on completely different characters and even changing in tone. I've heard authors aren't supposed to use prologues anymore, since many readers skip them...but this is as good a case for a prologue as any, because I would have known what I was in for.

At any rate, I didn't know what was going on, wasn't sure what characters wanted or why they wanted it, and overall just kind of muddled through this one. If I hadn't agreed to review this for the blog tour, I actually would've stopped sometime well before chapter 10.

The author seems to eventually acknowledge that the reader is left with questions--about three-quarters through the book, Thomas ruminates on all the questions that we, as readers, also have. And as the end approaches, some mysteries are resolved in a compelling manner and other mysteries are explained. I thought the book finished much stronger than it started. I don't mind some mysteries--quite a few are present at the end of the book--but I need to have SOME answers, and it took way too long for me to get to any.

Characters: 3 out of 10. Again, I couldn't follow the motivations, which means that I can't follow what characters want or why they want it--and it's difficult to engage with characters who aren't instantly likable or humorous, when you don't know what they want.

Through most of the novel, I actively disliked the protagonist, Thomas. Soon after the book starts, he attacks the (admittedly corrupt) monks for whom he'd been working as a slave, with practically no sympathy for what becomes of any of them. Later on he throws acid in the face of two men (substantially later, it comes out that this acid only causes temporary blindness, not permanent blindness and deformity--but by then his integrity was hopelessly damaged in my mind). I just found him very unlikable, probably due to his initial violence to get his way over a cause that I didn't even believe in. Maybe he is the kind of character that's supposed to start out rough and get better by the end, but I couldn't find much to like until well more than half the book had passed.

The less-important characters were pleasant enough, with the boy thief and Katherine being likable, if not groundbreaking.

Writing/editing: 6 out of 10. I saw nothing wrong with the writing style itself, aside from some abrupt point of view shifts within scenes (often accepted for fantasy, but something new writers are told to avoid, and not my favorite). But the way the story was revealed (or in many cases not) did not work for me at all. While I enjoyed the idea of how Thomas could win Magnus nearer to the end, I found some of those descriptions muddled and confusing.

Plausibility/believability: 3 out of 5. I felt like I got a fairly good sense of this medieval world (which was only VERY lightly speculative...almost every speculative element seemed to me to be plant-based). I didn't really get a sense of characters as behaving as if they were people of the day, but maybe that's part of the speculative.

Positive: 3 out of 5. It ended much more positively than it began, though I still have a bad taste in my mouth about the treatment of the overweight and even the disfigured.

Gut reaction: 3 out of 5. I'm glad it got better at the end...from the first half, I was very much dreading reading the second book the publisher generously gave us. (And frankly, I am starting to suspect the publisher purposely provided Book 2--shipped separately nonetheless--specifically because it promises to be a much better read than this book.)

Recommended for: Hardcore fans of medieval stories...through this book, no love of fantasy (or Christian fiction) required, in my opinion.

*In conjunction with the CSFF Blog Tour, I received a free copy of this book from the publisher.

Check out the other participants in the blog tour!