First, if you haven't read the Safe Lands series, there's a giveaway of ALL THREE BOOKS right now (September 29, 2014) at http://jojosutiscorner.wordpress.com/2014/09/29/csff-tour-giveaway-rebels-by-jill-williamson!

In The Safe Lands series, Omar falls prey to the lures of sex and especially drugs, so much that he would do anything for his drug or "stim" of choice, "brown sugar." 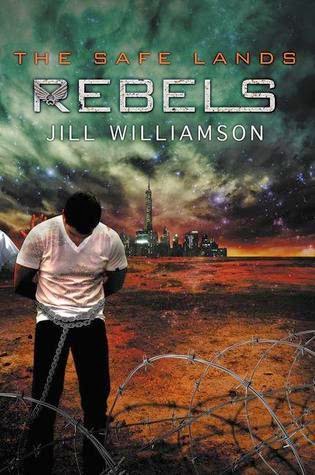 As far as I can tell, this story is aimed towards Christian teens. I was a particularly uncool teen (and that was quite a while ago), so I really didn't face any of Omar's temptations back then (and I still don't).

That's not to say that I don't have any addictions. Later on in the story, I noticed that Strikers (those who had gotten in trouble prior to Liberation) were prohibited from having electronic devices like Wyndos. So basically, if you fought to take down a corrupt system, they'd take away your Internet.

The Internet has become such a part of daily life that a lot of people--myself included--are horrified by the idea of living without it. And in fairness, it would be quite an adjustment to live without Internet access...it would be harder to buy things, harder to communicate with people, and in our world, perhaps harder to get your ideas noticed. I guess if you had a good friend who lived nearby who could use their Internet/Wyndo, you could probably manage, in this world and the Safe Lands both.  (Or if you had a Zane. I need to befriend a Zane.)

So I wonder, what if Omar had been addicted to social media or Simcasts instead of drugs? Such addictions would probably be less visible, maybe less destructive...but his addiction would have hit a lot closer to home for me, and maybe made me think even more deeply about what I might be loath to risk, should there be a pressing need to rebel against authority.

(And even though Mason is quite focused, I could totally imagine him getting caught up in the equivalent of Internet rabbit holes, reading and learning about so many different things. Maybe that's why he has to focus on fixing the thin plague--if he didn't have that sense of purpose, or if a cure were found, he could perhaps get caught up in unfocused pursuits himself.  Though knowing him, it very well might circle back to trying to fix some other problem in the world.)


*In conjunction with the CSFF Blog Tour, I received a free copy of this book
Posted by Julie Bihn at 7:04 PM 5 comments

Finally, a book review by Julie, for the CSFF Blog Tour! Wow; it has been a while.

Third/final book in a series. The so-called "Safe Lands" are a dystopian place where morals are lax, infertility and illness is rampant, pregnant women are celebrities, and rule-breakers--and anyone over 40--face a mysterious, final fate known as liberation. Young adult prodigy Mason and his troubled brother Omar are "liberated." Instead of leading to death (as some had suspected), those who are liberated find themselves little more than slaves. Meanwhile, the people of Glenrock live in hiding underground...until one of their own is captured and turned into the new Safe Lands "queen."

Can Mason and Omar escape and relay the truth to the people of the Safe Lands? Will the people of Glenrock ever be reunited and make it home?

Content: I didn't see much Christian content here, even compared to the previous books. I don't remember any Christian content that would have offended any non-believers, and linking much of this to Christianity seemed kind of a stretch to me. (I think that's a legitimate way for a Christian to write a book, but it wasn't what I expected from a Christian novel.)

There was substantial and somewhat graphic content that read very much as an argument against eating meat/in favor of a vegetarian lifestyle, though technically I believe it was more against factory farming.

Like the first two books, there is reference to drugs, sex, and even prostitution. I didn't notice any language because in the Safe Lands, new words like "stimming" have come along to replace the ones we know.

Characters - 8 out of 10. It was a pleasure to see Mason, Omar, Shaylinn (and yes, my beloved super-hacker Zane) again. When the people of Glenrock go underground, there are quite a few new people to meet (including a woman who's every bit as unlikable as Levi!). If anything, I feel like there were perhaps too many characters this time around, though I'm not sure that could have been avoided.

And I still very strongly dislike Levi. I got to almost tolerate him but then by the end of his final point of view chapter, I hated him all the more. I do sometimes have troubles with "growth" story arcs... In this case, Levi had no traits that I liked or could grab on to (OK, aside from a love of ranch dressing) and his growth was overall quite subtle, so I still can't stand him.

On the other hand, new characters like Medic Cadell and Nash were engaging, and we got to see new sides of some established characters, too.

Suspense/stakes - 4 out of 5. I thought there were a few slow bits here and there--when I got busy and was maybe 2/3 through the novel, I didn't mind taking a break for a few days--but the last portions of the book flew by.

World building - 5 out of 5. Even adding yet two new cultures/groups of people to the mix, Williamson did a great job making it feel like every environment was real. I hope I can do so well someday.

Writing/editing - 4 out of 5. Overall I felt the novel was somewhat rushed; I don't know if it was a rushed publication schedule or just a symptom of having too much content to fit in.  I lean towards the latter.  Overall everything read fine and I think it was competently edited, but I was very surprised to find two typos in the first paragraph after the section break on page 377, right as the climax was winding down. One of the errors created an incomplete sentence that hung me up for a little while.

Clarity - 4 out of 5. I felt like this novel was a bit rushed, but there were never any technical issues that completely lost me. (That said, I think it would be difficult for anyone who hadn't read the first two books to get into this one--as in Outcasts, there are precious few concessions to people who hadn't read the first book, although I actually feel like there may have been more explanations here than in Outcasts.  That said, I don't even remember Zane's missing ear being mentioned until near the very end!)

Plausibility/believability - 3 out of 5. Trying to keep from massive spoilers, it was a little hard for me to believe that a world so strictly controlled would let the events transpire that resulted in the truth being revealed. That said, I sure can't think of a better way for it to go down...I guess there were some sympathetic or curious people in high places who weren't mentioned or who I missed. I also thought the climax with Lawten was unnecessarily over the top, but I guess you have to set that kind of thing up if to take care of a villain.  (Though to me, the real villain was the society that was built, not one desperate individual.)

Positive - 4 out of 5. One could actually make a pretty good argument that even the rebels in hiding had created a world as messed-up and dark as ours....but in the end there is hope for improvement.

Gut reaction - 3 out of 5. This is a tricky rating. Based on Outcasts, I had my expectations so high for this one that I was almost bound to be disappointed. Williamson did a good job with this and things ended as well as I could have hoped for, but I still feel like it was missing something. If I knew there would be a fourth book, or short stories/novellas set in the same world, I'd be a bit happier with the ending.


*In conjunction with the CSFF Blog Tour, I received a free copy of this book. Actually, they sent me two for some reason, but I don't think I can do a giveaway since it's not the kind of book you can read without reading the first two in the series.
Posted by Julie Bihn at 9:00 AM 11 comments