This is Julie with the CSFF Blog tour! 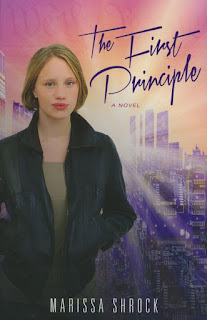 Ridiculously simplified summary:
The United States has collapsed into a totalitarian empire where minors receive mandatory birth control and, should that fail, abortions. When the district governor's daughter finds herself unexpectedly pregnant, she must choose between submitting to the termination of the pregnancy, or going underground with the people who would fight to remake the government...

Content: Very Evangelical, with several "conversion talks." Several violent deaths, not described in extreme detail. The lead character is a 15-year-old or 16-year-old (depending on if you believe Amazon's description or Rebecca LuElla Miller's correction below) who had sex outside of marriage and who gets pregnant. There's talk of abortion, a procedure which all "respectable" people in the society consider appropriate.

Characters - 6 out of 10. Vivica, the main character, was interesting enough--shockingly capable of getting herself out of messy situations and gifted at computer hacking.  It's first-person but her emotions aren't made manifest in the writing, and I still don't understand her motivations. I found Ben, the object of her affections, to be rather boring and not particularly likable, while Drake (the final player in a semi-love-triangle) was infuriatingly charming and compelling. Most of the villains were painted with broad strokes, but Vivica's mother, the governor, was somewhat more nuanced. I think the portrayals were appropriate for the genre, but I was hoping for something that might work better for older readers, too.

(It was another novel where all the women of consequence are mothers and/or pregnant; those who aren't, are not portrayed in a positive light. I don't think that's terribly uncommon for Christian novels at this point.)

Suspense/stakes - 5 out of 5. I read this over a weekend, rather unusual for me. Finding out about the underground was interesting and seeing how Vivica will get out of her next jam kept the pages turning for me.

World building - 4 out of 5. The world felt fairly detailed to me, with explanations of how the totalitarian government had developed, slang terms for their equivalent of cell phones, and so forth. Some of the details in the government seem scarily plausible. That said, I would have liked to "see" the physical places more clearly.

Writing/editing - 4 out of 5.  I thought the writing was fine and didn't notice any typographical errors. My main issue was that I felt incredibly distanced from Vivica's feelings and pain. There's some emotional angst, but even when she gets slapped at one point, she (tells us she) literally doesn't feel it when it happens. I tend to write less emotionally myself, but when the subject matter is a character deciding to turn her back on her entire world because there's a baby growing inside her, I expected her to have more emotions. I'd expected her, for instance, to have some kind of turning point when she felt the baby inside her, perhaps, but I saw nothing of the sort.  Maybe that's an intentional technique, though.

Clarity - 4 out of 5. Overall I had no trouble following the action. There were a couple chase scenes where I got a bit lost because the scenery wasn't described in detail so I couldn't follow where they were going.

Plausibility/believability - 3 out of 5.  This is kind of tricky for me. The explanations for how Christianity became illegal struck me as scary-plausible, to the point that I'm wondering if I should start learning more about hacking (although I feel like making the fake identities needed in dystopian worlds might be more fantasy than anything else). But I didn't personally "believe" Vivica's transformation or her progression towards Christianity. In today's political climate, I really wanted to read a compelling account of why a girl decided against abortion when the government mandated it, but she only rarely showed compassion for her unborn child, never seemed to really think of it as a human (referring to it as a "baby" but not anything about its potential). Her decision seemed to me to be initiated mostly from the fact that the boy she has a crush on begs her not to kill "his" baby, despite the fact that he has no ability (and to me, no interest) in actually supporting the baby once it's born. Arguing that a baby has a right to life because the father wants the baby to live, isn't exactly going to appeal to people who consider it a woman's decision. Frankly, I think the baby has an inherent right to life, but when a deadbeat father is making the argument, that really rankles me.

(I could be wrong, but it also seems to me like ALL of the rebels are Christians, which is good for Christians but I'm not sure if it's realistic...I feel like if freedoms were stripped away like this, it might not be just Christians fighting. Even the very secular The Handmaid's Tale acknowledged that in a world where freedoms are stripped in the name of some twisted version of Christianity, people who want to read the actual Bible will be persecuted, but it seems like some Christian books don't acknowledge the strange bedfellows we just might end up with in bad times...)

Positive - 4 out of 5. The ending is positive enough, though there's a lot of darkness to get there. While the main character turns to Christianity, she doesn't seem to focus on the hope it gives for the people she lost along the way...it was just kind of disconnected to me.

Gut reaction - 3 out of 5. Exciting story that I personally think could have benefited from a dose of emotion, particularly given the subject matter.

Recommended for: Teen girls who are fans of dystopian fiction.


Click below to see what other tour members think!

*In conjunction with the CSFF Blog Tour, I was sent a free copy of this book.
Posted by Julie Bihn at 7:00 AM 14 comments

Julie for the CSFF Blog Tour!

This month, we're talking about The First Principle by Marissa Shrock. The promotional description speaks of government control, mandatory abortions, and so forth.  One facet I haven't seen addressed in so many Christian books (in my limited reading), is the government creating an edited, "approved" version of the Bible.

The way things are right now, it seems almost hard to imagine the government "approving" of Christianity in any way, but certainly various Christian groups change interpretations of the Bible (and sometimes even words) through the years. And as humans, making little tweaks is just something we do.  Our Bible Study just got to the fall of man. When the serpent tempted Eve, he twisted God's words...but then, whatever the reason, Eve also quoted God incorrectly!

I think people are prone to corrupting and adjusting the Bible already, sometimes inadvertently...how much scarier if the government were to get involved.

Of course, all the dystopian fiction makes me wonder what kind of dystopian world should I be preparing for? The Christian fiction we've been reading for the blog tour lately, such as The Last Principle and Jill Williamson's Safe Lands series, hint that impressive computer hacking skills are probably the most useful skill. The Hunger Games suggests hunting will come in handy. Out in Arizona in the real world, there have been some preparedness conferences teaching how to farm and such.

My problem is that hacking and farming are not exactly overlapping skills. So where should I focus?! (Of course, I'm not sure the fun hacking skills we see in various forms of media are terribly realistic, but they sure look like fun, don't they?)

A sermon series at my church recently emphasized that the best way to prepare not to fall in persecution is to work at having a good relationship with God now. I agree, but The Last Principle reminded me of one of the places where I fall particularly short.

I'm a leader at AWANA at my church, which teaches kids to memorize Bible verses. I was never good at memorizing verbatim, so I didn't like AWANA as a kid (I love it as a leader, since I don't have to recite anything!). I need to remember that memorizing Bible verses--not just the basic gist of them, but the actual words--is a good practice for every Christian, so long as we remember the context.

My phone has multiple Bible translations on it and I can do a web search for any verse I like right now, so it seems kind of unnecessary. But someday we might not be so blessed to have the Bible so widely available, even in America...

Check out the other participants on the blog tour!

*In conjunction with the CSFF Blog Tour, I was sent a free copy of this book.
Posted by Julie Bihn at 10:00 AM 6 comments