Another review from Julie! Maggie read this one and gave it 3 stars on Goodreads. 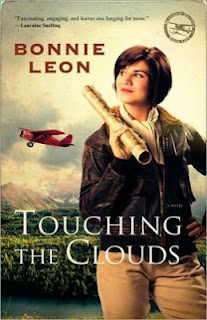 
Ridiculously simplified summary: In the 1930s, a woman's place is usually thought to be in the home. Instead, adventurous Kate calls off her wedding and moves to Alaska to be a bush pilot. She meets Paul, a determined homesteader. Both take comfort in the harsh conditions and fierce beauty of Alaska, while trying to overcome guilt from their pasts.

Content: I felt like the religious elements came up out of nowhere--Kate is calling in Bible verses, carrying her grandmother's old Bible with her, and so forth, but I never felt like she was really living life as a Christian--she seems more interested in doing things her own way. There are a few deaths.

This review is for the Kindle version, which was a free download at the time.

Compelling: 8 out of 10. I thought the historical storyline was pretty interesting, though I didn't believe it every moment. It was literally halfway through the book when the romance aspect started, which isn't necessarily a bad thing, but it isn't what I expected. I thought the last 25% of the book or so verged on melodrama, but I'll admit, I couldn't stop reading.

Characters: 4 out of 10. OK, first, this is a romance. If you don't know the conventions of who's going to end up together and are interested in reading this book, go ahead and stop reading right now, because this will spoil you.

You know the conventions?

Okay, so in romance novels, if there are two point of view characters (a man and a woman), in every example I've read anyway, they end up together, so we know what's going to happen.

Kate is interesting, fiercely independent, stubborn to the point of risking her life needlessly sometimes. I found it hard to like her, though, given how men adore her and she just throws them aside.

I didn't really care for Paul, the hero--I would have rather he spent less time feeling guilty, moping about Kate, and being unreasonable. I'm not that old-fashioned--I don't care if the man pursues the woman or the woman is hoping to get the man. But I didn't feel like either of them was seriously passionate about the other, so I didn't care for them together from a romance standpoint. Things might get more interesting in books 2 and 3 of the trilogy.

There were a lot of minor characters so they sort of blended together for me, though they weren't bad. The one who stood out for me was Mike, who was not deeply characterized, per se, but who was charming nonetheless--sweet, a good friend, always there when needed.

Writing/editing: 6 out of 10. It may have been the Kindle version I was reading, but quite a few paragraphs were rolled together when I thought they should have been split, and there was some problematic phrasing. The style was to skip from event to event, but the whole book takes place over at least two summers...I'm more used to an intimate, short timeline, instead of sometimes having months pass between events. That might be my problem.

Plausibility/believability: 3 out of 5. Some other reviewers disagreed as far as accuracy, but (not knowing anything about flying or Alaska) I really enjoyed the "feel" of historic Alaska and old-time piloting. As for criticisms about the Depression element, I don't know about the Depression in Alaska, but my general understanding is that if you actually had a job, things were pretty good for you during that period. My own grandfather went out west during the Depression to find work, so surely there were some areas that weren't suffering so much.

It did surprise me that Kate (who basically struck me as a modern woman) would be so accepted, but I guess it wasn't unreasonable. I didn't understand some of the survival techniques (or lack thereof) near the end, but I guess they were needed for tension.

Positive: 2 out of 5. There is some serious providence near the end (that's the reason Kate and Paul are evidently a good match). I felt like there was little emotional reaction to multiple deaths earlier in the book, though that may be in part because the book shows short scenes and then skips ahead quite a bit--so maybe there was more mourning, but we missed it because a month or more was skipped.

Gut reaction: 1 out of 5. I hate to say any more because it's a spoiler. It's about the romance element...


Mike was likable, loving, absolutely crazy for Kate, she runs to him for comfort more than once...but no, she doesn't care for him. She basically leads him on for quite a bit of time, only to decide she likes the fella she doesn't even spend much time with better. Another reviewer pointed out--rightfully--that she already dumped one nice guy. I don't know if Mike was right for Kate or not...but I would've taken him myself! Paul...not so much.

Recommended for: Fans of historical Christian fiction who don't mind strong heroines, jilted heroes, and a romance that takes half the story to get off the ground.

*I downloaded this book free for Kindle.
Posted by Julie Bihn at 8:00 PM 0 comments