Another book review by Julie! This one's interesting because it reminds me quite a bit of my near-forever-work-in-progress Chosen: Bonnie of Sheshack. I guess every teenager secretly wants to get sucked into another world and find her own knight? 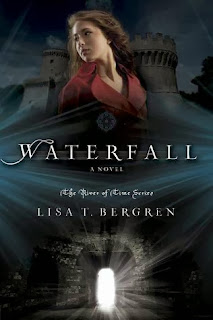 Ridiculously simplified summary: In modern-day Italy, an archaeologist's teenage daughter is drawn back to medieval times, where she is rescued by a handsome lord...who just happens to be betrothed. Taken into the castle, our heroine searches for her sister, hoping to get back home.

Content: Extremely light Christian content--I expect it might ramp up as the series progresses, but at the moment, though the people talk about praying to God and such every so often, Gabi isn't especially caught up in it. I don't think being a Christian would have any bearing on one's enjoyment of this book.

There is some violence, but given the medieval setting that seems reasonable enough. The torture is more upsetting, though if the story is to be believed, it was normal for the era (and that seems plausible to me). The main character, Gabi, is very physically attracted to a man who is betrothed.

Compelling: 7 out of 10. I found the beginning dragged, but once Gabi achieved a particular goal (somewhere more than midway through if I recall correctly) I thought things got interesting and the story flew by. As the first in a series, I didn't find the ending completely satisfying, but that's typical.

Characters: 6 out of 10. I did not care for Gabi much at the beginning, though she did grow on me. The other of the characters were fine, but aside from Lady Rossi, Lia, and maybe Fortino, I didn't find anything particularly memorable about them. Marcello and Luca, the two lead men from medieval Italy, didn't feel SO much different than modern-day men to me, though Gabi makes a point of noticing how manly and different from modern men Marcello was, and Luca's a bit of a charmer. Lady Rossi, Marcello's betrothed, is interesting, though we are seeing her through jealous Gabi's eyes, so I have no idea if she is really a jerk (as Gabi thinks through most of the book) or if she's better/fiercer than expected (as Gabi thinks during part of the middle).

Writing/editing: 8 out of 10. I only noticed one minor typo ("I turned obediently and took a look swig, then another, ignoring how the liquid burned all the way down my throat and inside my gut."). I thought the style didn't quite feel like a teenager all the time, but it wasn't bad in that regard. There were a few good lines; my favorite was, in regards to a character with severe respiratory problems, "He still sounded like a sick seal..."

Plausibility/believability: 3 out of 5. This one's hard. I felt like the overall historical place-setting was very good--to me, it felt more real than most historical romances I've read. (Even though it's not always a romantic setting...chamber pots are referenced more than once.)

On the other hand, these people in medieval Italy discovered Gabi coming out of a tomb, in clothing more revealing than undergarments, and she's spirited, has little respect for her social "betters", and even insists on wielding a sword. And they like and even love her for it! It's an interesting conceit, but the fact that Gabi can fight off bad guys with a sword, in addition to her many other talents, felt like a bit much to me.

Conveniently, she is able to speak/pick up medieval Italian--if I recall correctly, she picked up some Italian from her parents' archaeological vacations. I don't find it exactly plausible that she could speak to these people as easily as she did--though there were some slip-ups.  But it is tricky to get people in other worlds to be able to talk to each other, so I'm okay with it. Then again, she also knows some Latin and French, which puts her well ahead of the curve for most Americans...

Positive: 3 out of 5. While the ending left certain things unresolved, everything ended as well as could be expected. I have to ding it a little on "positive" due to the substantial threats of torture, occasional actual torture, and lines like:


But he was untying his trousers. He did not intend to kill me.

He had darker intentions still.

I wish Bergren would have added a word: "He did not only intend to kill me." Then it would have avoided the cliche that to a woman, being raped is (supposedly) even worse than being killed.

Gut reaction: 4 out of 5. I'm not the target audience, and I hate to say I'm not even that interested in whether or not Gabi and Marcello get together. But Gabi's sister Lia and the knight who likes her, Luca, are likable enough, and the ideas interesting enough, I have some interest in reading some more.


*I downloaded this book for free, I believe on Amazon.
Posted by Julie Bihn at 12:00 PM 1 comments