How Numb is he? - CSFF Blog Tour

The main conceit of the novel is that the protagonist, Crusader, is "numb."  Early on, we are told:

He didn't know pain. He wasn't hindered by emotions.


This is tricky to pull off; I'm not sure an emotionless character would be an entertaining protagonist, at least not a film.

But how "numb" is Crusader, really? I'd argue that even in the first chapter, Crusader isn't an unfeeling robot--he's not what I'd expect from someone who isn't hindered by emotions.

In the first chapter, Crusader:

Throughout the novel, he reads to me more like a cold, trained assassin with superhuman endurance and perhaps some sort of pain-deadening nerve block, than someone who I'd think of as "numb." I guess the key word in the description above may be "hindered"--he might feel emotions, but they don't hinder him.

Of course, as the story develops, Crusader does start to feel more. But my question is, was he always the way we see him in Chapter 1? Ostensibly "numb" but still with longings, concerns, preferences, distractions, that he doesn't let take a foothold? Or did he already start his journey of change before he met Isolda?

I'm guessing the guilt plagued him throughout his time as a Ministrix agent. But I wonder if some of the other feelings may have been more recent developments. I think the revelations later in the book don't disprove the idea that his "change" started maybe even before we met him. And for me, I'd expected a dramatic transformation upon meeting Isolda, not the gradual transformation we see. But if he'd already started to feel on his own, then her introduction was just one stop--albeit probably the pivotal one--in his journey.

(That said, I might argue that Balaam was more "numb" than Crusader ever was in the book. Maybe more numb than the other members of the Ministrix.

*In conjunction with the CSFF Blog Tour, I received a free copy of this book.
Posted by Julie Bihn at 8:00 AM 1 comments

Another book review by Julie, for the CSFF Blog Tour! 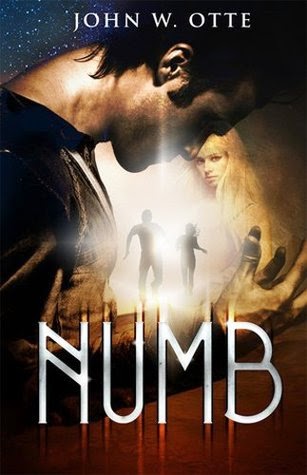 "Not that the prospect of killing more people worried him; all fell short of the glory of God and deserved whatever they received. But it was a logistical nightmare."

Crusader, an assassin gifted by the Almighty with the inability to feel pain and emotion, does the work of the Ministrix. But when he's sent on a mission to kill Isolda Westin, seeing her face makes him start to feel...and he can't pull the trigger. Will Crusader and Isolda be able to outwit the Ministrix?

Content: Christian references throughout; I'm not sure how they'd read to a non-believer; they seemed more geared to the Christian set. (And fair enough; the vast majority of readers of Christian books are Christians, so why not?) I found the idea of new believers being discipled for years is an especially-welcome addition to speculative fiction, where many characters who are effectively Christians don't even attend church or have any formal training at all.

I do wonder if the Christian characters might have been referencing the Bible just a little out of context to emphasize their pacifism (whereas the Ministrix twist it massively). I didn't care for the phrase (about God) "but that's not the way He works anymore", the phrasing of which implied to me that she was saying God is not unchanging.

On the other hand, I am not a pastor like Otte is. Either way, by the end I was actually looking up Matthew 28:19 at Blue Letter Bible to try to prove a point against the bad guys. Whether or not my quibbles have any legitimacy, it's hard to find fault with a legitimately Christian book that made me actually think a little about my faith and check in the Bible.

Crusader is an assassin, but I was still surprised and a little nauseated by the level of gore and detail in the early parts of the book (like the "wet sound" of a knife during a stabbing). Even near the end, Crusader seemed to take life kind of casually, although that belief is certainly not glorified.

With a little tweaking, I think this could have actually doubled as a Christian romance; the romantic arc sort of mirrors those, and the only point of view characters are Crusader and Isolda. (I've read enough Christian romances that I don't feel like the romance here quite matches up to that, but it was interesting to see, given the genre.)

Characters - 7 out of 10. The characters were interesting overall. I felt like some of them blurred together (that could be the sheer volume, as there are 3 distinct groups of people here, and also the twists of alliances that happen throughout). Aside from Crusader, I didn't get a deep sense of any of their interests and so forth. Isolda was likable enough and Crusader was fairly sympathetic, though I'm not sure "like" is the word I'd use to describe him. It was nice to see female characters in more modern roles (Isolda is an engineer and Elata is a gruff commander who I couldn't help but see as related to Captain Amelia in Treasure Planet). I found the more minor characters, like Krestyanov and Elata, to be a bit more entertaining than the point of view characters, but that could just be because we see less of them than we do the others.

Suspense/stakes - 5 out of 5. To me, this was a page-turner full of twists and danger. I did (kind of) guess Isolda's significance the moment we saw how many credits she was worth, and I got suitably irritated when I as a reader was purposely left in the dark for several chapters about what was in a certain file. But I was blindsided by most of the other surprises, most of which made sense when you go back and look at them.

World building - 5 out of 5. Three different societies and each society had its own rules and ideas. There were even groups within groups, like the Engineering Guild, and enough time to describe (seemingly) extraneous technology like holographic simulators that allow teddy bears to chase children and "glomp" them.

The space travel ideas were fantastical but interesting and the technologies "sounded" plausible to me. Otte shows a talent for painting a world with just the right level of detail--not too much to get bogged down in it, but not so little that it's dull. A search shows the phrase "Toleration Act" coming up just 6 times, and I don't see it explained in detail anywhere, but there's enough context to understand some of the issues with it.

Writing/editing - 4 out of 5. I found more typos than I was expecting, including an outright misspelling. That said, I only saw several typos; the book was not rife with them. I also read an electronic copy; perhaps the print version didn't have those problems. Early on there were some phrasings I found awkward, like using the same word twice in one sentence, but as the story progressed either the editing got better or I got more absorbed. For the most part, the writing was just how I like it; not too fancy but got the job done, and highly readable, with a few poetic bits thrown in for good measure. There were some witty turns of phrase and a light touch of humor here, which I appreciated.

(I would have liked to see Isolda react to a certain Twist, but maybe that would be addressed in a sequel...?)

Clarity - 3 out of 5. As exciting as the ride was, there were so many twists and so many characters, I did find myself getting lost here and there. Not a dealbreaker by any means...I think it got tricky because you get these exciting scenes where you want to know what happens and read quickly, while there may be blink-and-you-miss-it references contained in there. I also didn't quite follow Crusader's Numbness, which seemed to ebb and flow, sometimes without explanation. Even early on, I couldn't necessarily see what classified his emotions/etc. as "numb" and once he met Isolda, almost all the didn't seem to me like he was numb at all.

Plausibility/believability - 2 out of 5. To reiterate, I thought the worldbuilding was believable and excellent. My top issue with plausibility is the romance element. Given what Isolda goes through early in the book, I'm frankly shocked that she would ever think of her would-be assassin in any sort of romantic light, let alone as quickly as she did. I didn't feel like she even acknowledged her earlier poor judgment and her further lack of judgment in falling for him, and I don't see why she did.

By the end, there have been several things that happened which were either massive coincidences (secular view) or else providence (Christian view). I didn't feel like those elements were acknowledged as being put in place by God. I'm pretty sure that in the world of this novel, God DID put those things together, but I would've loved to see that expressly mentioned.

Positive - 4 out of 5. Given all the characters go through, this ends as happily as could be expected, and it gets me wondering how they may help better their world.

Gut reaction - 4 out of 5. Coming away from this book, I feel like the official descriptions were kind of misleading and didn't really point to the story I expected. I'd thought Crusader would make his choice when he saw Isolda and then immediately save her and go on the run with her. Instead, Crusader struggles repeatedly, torn between wanting to kill Isolda and not (which might be part of why the romance didn't work for me). And there are twists and betrayals and intrigue and issues to deal with in the Ministrix and rescues and separations...  It's still a good story, but it's much more complicated than what I'd expected from the blurbs.

I found it an enjoyable read overall, and was left with some things to think about.

Recommended for: Fans of science fiction set in space.

*In conjunction with the CSFF Blog Tour, I received a free copy of this book.
Posted by Julie Bihn at 8:00 AM 9 comments