I'll admit, I was expecting people to take issue with my view of Henley's portrayal of angels, but I was surprised by the comments nonetheless.  They were good and gave me a lot to think about, but I found it weird that people seemed to find it interesting or unique that I would view angels as angels! :)

Several other folks on the tour agreed with at least some of my concerns with Eye of the Sword.

Chawna Schroeder's concerns about the content seem to run even deeper than mine. Shannon McDermott, who I believe I cited last month for her excellent writeup of Beckon, mirrored almost all my concerns about the portrayal of God (and in her review of Breath of Angel she again mentioned almost everything I'd mentioned!). I'm starting to think I may want to look at her reviews the next time I want to find a book to read. Janeen Ippolito noted her concern of Christian teens confusing the "angels" with real angels (a threat I actually think is a bit more worrisome than Christian teens becoming overly interested in vampires or werewolves) and Anna Mittower also expresses concerns regarding angels. Even Rebecca Luella Miller, who was able to separate the angels from the ones of our world, notes some concerns about the absence of God. Like me, Faye Orgard would not call the book "Christian."

On the other hand, Shane Werlinger and Keanan Brand both saw Biblical parallels in a climactic scene fairly early in the book. (Though I adore Jeff Chapman's calculating logic regarding that same scene! I could've sworn someone else said something similar but I looked through every blog and couldn't find it...if it was you, please post so I can edit it in here!)

A certain Matt Damon movie (don't click if you don't want spoiled) has what can certainly be interpreted as angels. I kind of liked that film because it wasn't a Christian film (if it had been portrayed as such, I would've been annoyed) and it brought up a lot of really interesting ideas. Not saying the portrayal was closer to the truth than Eye of the Sword's (it probably wasn't) but it was a conversation-starter. 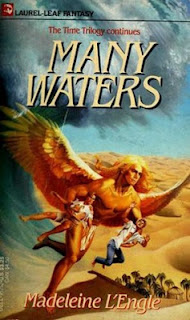 The other is a book I read once, years ago, Many Waters by Madeline L'Engle. I started re-reading it Monday night in hopes maybe I could get through and do a review for today, but I saw that wasn't going to happen. Let me just quote the first description of an angel in that book:


Then came a vivid flash of light, similar to that of the unicorn's horn, and a tall presence stood in the tent, smiling at the old man, then looking quietly at Sandy. The personage had skin the same glowing apricot color as Yalith's. Hair the color of wheat with the sun on it, brightly gold, long, and tied back, falling so that it almost concealed tightly furled wings, the light-filled gold of the hair. The eyes were an incredibly bright blue, like the sea with sunlight touching the waves.

Lamech greeted him respectfully. "Adnarel, we thank you." Then he said to Sandy, "The seraph will be able to help you. Seraphim know much about healing."

So this was a seraph. Tall, even taller than the twins. But the only resemblance was in height. Otherwise, it was totally different, beautiful, but alien. The seraph turned to Lamech. "What have we here?"

--Many Waters by Madeline L'Engle

Not saying that description (or book) is perfect. And OK, the cover is rather creepy. But I feel like the description shows at least a hint of the majesty and mystery of angels, which is what I'd like to see in more Christian portrayals.

In fairness, I re-read Many Waters a few months back. The angels all have the ability to shift into an animal, which is shown repeatedly. There is outright questioning of God--including one of the main "good" characters outright calling God a sexist, among other things. So, there are numerous worrisome aspects in "Many Waters" as well, and not just because it's in effect Biblical fanfiction. I guess the differences in my perception came from both where I was in my life when I first read "Many Waters" (a lot less well-versed in my faith) and also expectations of a secular book versus a Christian one.
Posted by Julie Bihn at 8:30 AM