So I've probably written more than my fair share of less-than-glowing reviews. When I saw we were doing Angel Eyes by Shannon Dittemore (website, Facebook), I was wary. Angst-filled girl moves from the big city to a small town to live with her father, and then a strangely attractive, apparently supernatural young man shows up at her high school and evidently has a thing for her? OK, granted, I haven't read Twilight but I KNOW Twilight's not my cup of tea and I assumed this wouldn't be either. I didn't request a review copy because I didn't really want a copy of a book I didn't think I'd like and I REALLY didn't want the obligation of reading a book that I thought might be pure torture.

But, my local library had an electronic copy that I could borrow on my Kindle for free. So here I am, writing my review! 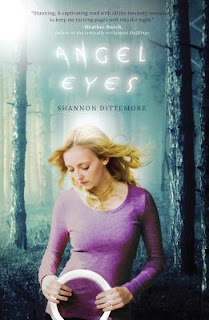 Ridiculously simplified summary: Guilt-ridden teen Brielle moves back to the small town of Stratus. She meets a mysterious young man named Jake, who speaks of angels. Turns out, there's a whole spirit world Brielle never knew of...and even the physical world around her has more darkness than she could ever have imagined.

Content: Some violence against adults, children, and angels, including murder. The dark twists closer to the end surprised me. I'll speak of angels in "Plausibility/Believability" below. Besides the ending, the only thing that tempted me to throw my Kindle across the room was:


"Lean not on your own understanding." The words are melodic, fortune cookie-ish.

Any protagonist comparing the word of God to a fortune cookie, without instantly being corrected, makes me squirm.

Oh, and let's make it clear. I'm female, but not a teenager. I was never into much of what teen girls were "supposed" to like back in my day (Beverly Hills 90210, Saved by the Bell, New Kids on the Block). As I hinted at, I don't care for Twilight.

In short, I am not the target audience. (IANTTA) But hopefully the rating system will help make things a bit better.

Compelling: 6 out of 10. I can't stand when characters spend their time moping and pitying themselves, and at the start, that's Brielle's forte. She spends (literally) the first quarter of the book beating herself up with guilt over some unstated awfulness in her life. And even once we find the source, her guilt didn't feel quite right to me.


She's beating herself up over something she couldn't have controlled

That's not necessarily unrealistic, but not something I want to read.

The middle section, where we start to learn about the world of angels and demons, is more interesting, and there are parts I absolutely devoured. The world set up is fascinating, with a lot of potential.

Near the end, though, a bunch more people come in and the situation got very complicated. I found some of the twists unbelievable, while the action ramped up and I couldn't follow all of it. (I have that trouble with quite a few books, though.)

Characters: 5 out of 10. I enjoyed some of the minor characters--Kaylee was entertaining and when we see Ali she was great. The angels were likable, and Jake was interesting enough, even charming at first. Brielle was just hard for me to like, which drove the rating down. Beautiful teen ballerina/photographer...not my kind of character. Her number quirk kind of creeped me out. (IANTTA)

I don't personally feel things along with Brielle, but rather I hear her tell me about them. For instance, pretty much every critiquer advises writers to show, not tell--to avoid saying "It was" etc. (For a poor example, instead of saying "It was cold," say "The chill air raised goosebumps.") There are few "was"es here, because the book is all present tense, but there are tons of "is"es. That said, a reader may not mind that at all...a teen reader almost certainly won't. (IANTTA)

Earlier in the book, some of the phrasings delighted me, though. To describe the condition of a car:


One of the back doors is missing a handle, and the other is red.

It just made me laugh. (Which shows that yes, "is"es can work just fine.) The descriptions of the Celestial world, too, are interesting--I couldn't have come up with them.

Plausibility/believability: 2 out of 5. I'm still a bit squeamish about people writing fantasies about rules that angels have (mostly that one angel's only guidance from God is being given clues that he has to decipher). But as I mentioned earlier, I'd say that most of it is more extra-Biblical than anti-Biblical. I don't personally believe real angels are quite like the ones in this book, and I'm not so sure they literally live among us long enough to even raise a child as their own, as Canaan does. And I really have difficulty believing God actually gives angels clues so they can try to do His will--though I can't say that it's completely impossible, and I don't mind the speculation. In short, Dittemore does quite a good job painting the world, with only a few inconsistencies. I enjoyed the angelic aspects on a speculative level, and they made me think about the spiritual level. If plausibility were just limited to the spiritual element, I'd give this at least 4 out of 5.

But what really got me were the problems in the "Terrestrial" world, and specifically, the human trafficking subplot. The way I read it, at least, the captives were primarily white, middle class, and fluent in English. Human trafficking is a terrible thing and I'm not denying it happens in America. But I live in a world where a (white, American) girl who's kidnapped and kept as a slave can make the news years after her rescue, and where I live, the "Fundamentalist" polygamist Mormons in Colorado City make the news with some regularity. I just can't believe that numerous well-connected families' children would be kidnapped and no one even noticed. I'm not sure how it should've been handled, given how distasteful it would be to have the white/middle-class kids save the minority kids. Frankly, I would've personally rather that part of the plot had been more subtle to begin with, as I thought the spiritual element was intense enough without such an extreme ending. By the end, I didn't feel like I was reading the same book I'd been set up for. But hey, (IANTTA).

(If I am wrong about exactly who is trafficked in America, I'd like to know. But I looked both on Dittemore's blog/website and chabdai.org, the site listed at the end of the novel, and could not find anything about human trafficking of multiple, English-speaking, white Americans.)

Positive: 4 out of 5 (maybe). While some rather shocking things happen, God has His purposes and will work all things out to good. Except...

Gut reaction: 2 out of 5. ...I guess a trend of YA novels is to have a nice happy ending, and then in the last few pages, throw a huge wrench in it to try to make you read the next book? It happened in The Hunger Games and it happened here. Frankly, that infuriates me. If you want to hook the reader, throw a few paragraphs or even a chapter from the sequel in at the end. But I think a book should stand on its own. Having something random go wrong to entice the reader to keep reading makes me not want to read, and makes me less interested in reading the rest of the series.

I also found it disturbing that multiple villains are described as having "dark hair, dark eyes, olive complexion." Granted, there are a lot of villains, but it just rubbed me the wrong way.

Recommended for: I think this would be an excellent book for fans of "angel" books. It gives an actual Christian point of view--I don't agree with every bit, but it's a far sight better than many portrayals.

It might help if you are a teenage girl, though!

Here are the other tour participants!

*I downloaded this book free from my local library.
Posted by Julie Bihn at 6:44 AM