In Which I Review a Novel - The Fatal Tree by Stephen R. Lawhead - CSFF Blog Tour 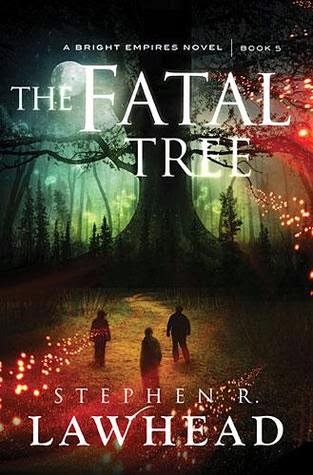 In the concluding book of the Bright Empires series, our world--and all worlds--are spinning into chaos, with strange, unexplainable events and anomalies as the universe undoes itself. Kit, Mina, Cass and the other ley-travelers must travel through different times and universes to try to fix all timelines. Can they prevent the collapse of time and space?

Content: This was overflowing with Christian content, with inspiring acts of forgiveness, redemption, and even a vision of God. (I still have some problems with the concept that humans could take actions that would cause everything God created to have never existed...but since--spoiler alert!--the multiple array of universes in existence are not destroyed--one could argue that humans can't destroy everything God ever created because God would put in place the people who could prevent it.)

Characters - 7 out of 10. Like many series, mostly the same characters inhabit this final book, without many additions.  A fairly large number of scientists came along; they blurred together for me. One character has a very drastic change, which I thought worked well. Most of the others were more or less steady. Lady Haven and Mina, the most strong-willed female characters here, had quite a few similarities, but since I like that kind of woman, it didn't bother me. Characterization wasn't really the focus here, but I had no real problems. If you read the earlier books and liked the characters there, you'll probably like them here.

Suspense/stakes - 3 out of 5. I'll talk more about this Wednesday and this ties into plausibility, but to me, I thought the stakes were too high, if that's a thing. I just could not believe that the entire world--all worlds--would not only be destroyed, but would be completely undone, so that they never existed. Theology aside, the stakes are so high that you know full well that the worst really can't actually happen.

To balance this, Lawhead occasionally put beloved characters into peril, which was more exciting, because there's certainly no guarantee that any lead character will survive these newly unstable worlds. And speaking of instability, Lawhead did a very good job of showing the effects of our world falling apart...the thought of a bridge simply vanishing while people are driving across it scares me more than the thought of all of God's creation being undone, because it just feels more plausible.

World building - 5 out of 5. The entire series shows a high level of detail and realism. I'm continually impressed by the way Lawhead integrates so many different historical and historically-inspired settings and events. This is one of those series I read and realize there's no way I could write such a thing myself...it just plays to things that I enjoy reading but wouldn't be able to pull together.

Writing/editing - 4 out of 5. Overall, I had no major problems with the writing. I thought that perhaps too much time was spent on one character's change, with two separate lengthy internal monologues that I thought overlapped quite a bit of content. One other nitpick would be when two completely unrelated characters from completely different backgrounds and eras start quoting from what sounds to me to be the same Bible translation. In my Bible Study, no one reads from the same translation, so I don't know why these characters would both be using the same translation, unless it's restrictions from the publishing house needing just one translation.

(Edited for knowledge--in the comments, there's a good discussion about the appropriateness of using KJV. Upon a closer look, I saw that one of the aforementioned characters quotes a verse in what--edited again--what wasn't at all KJV, and what Meagan Myhren-Bennett indicated appears to be at least partly from an English translation of the Knox Bible.  I don't see that verbiage anywhere on the entire Internet except for in this book, but the end of the verse appears to be KJV, with different punctuation, though that could again be the Knox Bible. Dr. Young is still a couple hundred years "older" than the other character...but point taken that some churches even today still stick to KJV, though I see no reason why this second character's church would have specifically been using "thees" and "thous".)

Some of the descriptions felt over-long to me. That's more my preference than a problem, but given that literally the whole world is hanging in the balance, I felt like the descriptions, which were fine and even eloquent in previous books, slowed things down a bit too much.

Clarity - 4 out of 5. I felt like things got perhaps a bit muddled by the end, but that does make sense, given the plotline. (And in fairness to Lawhead, I may not have read as closely as I should have everywhere, since I was so eager to find out what happened.

Plausibility/believability - 3 out of 5. Not everything in this book went along with how I picture the universe and God working, and, fair or not, the idea of God's works being undone didn't really work for me. (Though the scientists here also say that most people don't believe in global warming despite scientific evidence, so I guess that's the same reasoning here?)   Etzel also remains superhumanly good, but that's not impossible.  Maybe implausible, but I've heard of forgiveness similar to his in real life (and he's technically not in our world anyway).

Positive - 5 out of 5. Overall a happy ending and Etzel's actions continue to amaze.

Gut reaction - 4 out of 5. Probably my only real disappointment was that I saw the series as being set up as a quest for the Skin Map, more than the Spirit Well itself, but in this last book, the Skin Map is of no significance. There's absolutely nothing wrong with this structure, but I think subconsciously it feels just a touch off because of that. Certainly, this was an enjoyable and satisfying end to the series nonetheless.


Please visit my fellow adventurers on this month's tour!

*In conjunction with the CSFF Blog Tour, I received a free copy of this book. Also free tattoos. The temporary kind.
Posted by Julie Bihn at 7:00 AM