Julie once more for the CSFF Blog Tour! 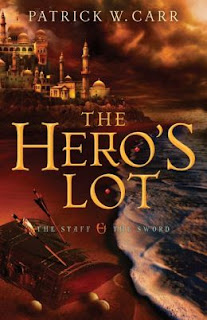 
Ridiculously simplified summary: Second in a series. The kingdom of Erinon, perhaps the whole world, is in grave danger. When the king dies, the kingdom's protection will expire as well, plunging the kingdom into chaos and war.

Martin the priest and his companions, nearly caught using predictive lots for forbidden purposes, have to flee the conclave to avoid discovery. While on the run, Martin discovers that the "unknowable" force Aurae is in fact knowable.

Meanwhile, town drunk-turned-warrior and reader of the future, Errol, is unfairly accused. He is compelled, condemned to journey to a far-off kingdom to kill the near-invincible Sarin Valon.

Content: This book shows its Evangelical colors, with a new group of (basically) Christians who follow the call of Aurae (the Holy Spirit) instead of the doctrines of the Church. Casting lots is not outright condemned, but Aurae is greater. (It was interesting to see such a heavy focus on the Holy Spirit...more than I recall seeing in any other novel I've read lately.)

There is quite a bit of violence in this one, including multiple beheadings, puddles of blood, and so forth--I got a bit nauseated at parts.

Compelling: 7 out of 10. If you read my review of A Cast of Stones (Book 1 in the series), you probably realized I'm not a fan of epic fantasy.

I actually enjoyed several portions of this book, but I found it tricky to rate, given the multiple storylines. I had some interest in Errol's exploits even early on (and much moreso later).  But since I have no interest in the church arc and politics, I had almost no interest in Martin's thread until the very end of it (more on him later).

The last hundred pages or so got more interesting to me, though. Unlike A Cast of Stones, I thought this book built to a logical and satisfying conflict. As it's a trilogy, of course things weren't resolved by the end, but I felt it was structured better than the first book.

Characters: 4 out of 10. Many of the characters from A Cast of Stones are back in this one. Aside from Naaman Ru and Adora, I don't like any of the returning characters here more than I liked them in A Cast of Stones; in fact, I found Rohka less likable, bordering on unbalanced. There are a few new characters which, on the balance, I found about as likable as the ones we left behind in Book 1. Errol is still a good character, although he goes catatonic for a pretty long stretch. (That's not unrealistic, but I have no patience for characters who do that in any book; I want to read about people moving on, not moping.) I still strongly dislike the priests, and in particular Martin.

Unfortunately for me, many pages of this novel are from Martin's point of view, and the scenes did little to endear him to me. His story arc features him thinking he's not good enough (instead of being too physically weak and drunk, like Errol, he considers himself too physically weak and fat). Despite the shortcomings for which Martin despises himself, he is Chosen for some sort of greatness. If you like Martin, you might think that is a fun parallel to Errol's arc, granted.

Writing/editing: 4 out of 10. I thought the writing style in this was worse than in A Cast of Stones, or maybe I just noticed problems more.

First, there are many scenes from Martin's point of view, and I was expecting at least a subtle change in the character's thought processes and narrative style to match who he was. Instead, I felt like Martin's scenes were written in an identical style to Errol's. So instead of any quirks of the style being due to getting into Errol's head, I now see the style was simply the author's own style, since an older priest and a young man think the same way. I think there was a real missed opportunity here--seeing two substantially different voices would have been compelling.

The fight scenes are full of action verbs, but I think that causes some odd phrasings. For instance, on page 101, (crossbow) "Bolts sprouted from the flesh of the bowmen like quills" and then 4 paragraphs later, an arrow "sprouted in a man's throat." Since things that sprout come from beneath the surface, I thought "sprouted" was an odd term to use for objects that are likely penetrating, at least as far as Errol can see.  And to see this unusual phrasing twice in such close succession distracted me. Every author has some of these words that they use more often than an editor might expect (I could've sworn my co-author and I had a blog entry where we listed ours, but I can't find it--"just" and "back" were two of our simple ones).  In a perfect world, I imagine an editor would go through and ensure overused and notable words are used carefully.

I hadn't been distracted by the "telling" in A Cast of Stones--if every emotion and thought were "shown" it probably would have been an extra 200 pages long! But in The Hero's Lot I thought some of these "telling" instances should have been expanded to draw the reader in.  On page 397, to describe what Errol thought may have happened to someone he cares about, it simply says "Errol's imagination conjured images that disturbed him. The tenor of his heartbeat increased until it pounded against his ribs." For myself, I'm not feeling his anguish--I feel like I'm being told he had some bad thoughts that made his heart pound.

I actually enjoyed the ending and some other parts of the book, but this enjoyment was due to the plot. The writing isn't terrible by any means, but I think another round of editing could have made the story shine.

Plausibility/believability: 2 out of 5. I have many of the same concerns I had from A Cast of Stones, but there are fewer of the weaponry details I enjoyed so much in Book 1, though I thought I "saw" the new places visited better.  I did think it was rather strange and convenient that numerous people were forced into doing what the plot required by being compelled by the church...if not for compulsion, one character may not have appeared in this book at all.

Positive: 3 out of 5. Things aren't going great at the end of this book, but Christianity finally makes an appearance here. I think most of this book is darker than A Cast of Stones (which was pretty dark itself!) but this one ends happier so I found it less depressing.

Gut reaction: 3 out of 5. The more optimistic ending gave me a better feeling about the end of this book.  I actually got more interested as the book progressed (provided we weren't following Martin!).

But the treatment of women drove me absolutely up the wall. On page 341, a woman in a city's council expresses interest in Martin the priest (during a meeting!), then kisses him on the lips and says if he tires of the priesthood, he "would make a fine husband."  (While there were other women in the council, the one who wasn't eying the priest like a catch doesn't even get a name, as far as I can see.)

Two pages later, a ship captain talks to his wife or lover and "swatted her on the rump." Seriously?!

Adora and Rokha are all right, in fairness, but I still get the feeling that women are just there to be love interests and daughters, not generally valued in their own right.

Then again, this is a plot-heavy book; few of the plot points occur due to the purposeful actions of any of the heroes, male or female. In fact, one could probably argue that Adora is one of the few characters who chooses multiple courses of action for herself, instead of being outright forced into it by others. She might truly come into her own in the final book.

Here are the tour participants!

*In conjunction with the CSFF Blog Tour, I received a free copy of this book.
Posted by Julie Bihn at 6:00 AM