Julie here! OK, it looks like on the last CSFF Blog Tour, some folks stopped by on Monday and almost no one came back when I posted my review on Tuesday. So I thought I'd try something different and put the review first. 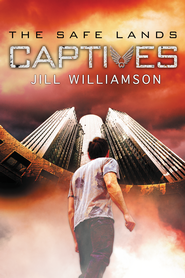 
Ridiculously simplified summary: After a waterborne illness decimates the human race, most of the survivors live in the Safe Lands, a walled city devoted primarily to hedonism, where everyone is "liberated" at the age of 40, never to be seen again. Everyone in the Safe Lands suffers from a deadly skin disease...and lately they have had terrible trouble having babies. Their only solution to the latter problem is to find uninfected people from outside the Safe Lands who can bear children for them.

Things do not go well.

Content: I felt the religious content was present but fairly light. I liked that the outsiders (ostensibly Christians) were not always right, and a few of the things their society did weren't even necessarily good or right, while the Safe Landers aren't all necessarily evil, either.

There is substantial talk about artificial insemination/pregnancy (with more than one visit to a male donation center), casual sex (not portrayed positively, but present), and several scenes of drug use, as well as shootings and fights. There are words (both old-fashioned and futuristic) used in place of curse words, which doesn't bother me but I've heard it offends others. There was a vague implication that the sex scene in Titanic was not too graphic/didn't show too much (not referencing the "artistic" nudity scene), though in fairness this came from a character who was hardly a moral paragon. However, a character who was supposed to be much closer to perfect decides that having a kissing session with someone else before you get married is nothing to be ashamed of.

Compelling: 9 out of 10. Tricky for me to rate because the first 50 or so pages, I was wishing I hadn't signed up to review this 415-page book. The prologue (which starts on page 7) just confused me, making it hard for me to get interested, and then the early scenes in Glenrock didn't interest me in the least. For a small village, there were an awful lot of characters thrown at me (which I never enjoy) and I found their world contradictory and not compelling. The first two chapters from Mason's point of view in particular left me cold; he just seemed like a listless and dull character, mostly observing and not showing any courage. And even when the soldiers from the Safe Lands come, I wasn't really interested...to be honest, if I would have been reading this at a bookstore, or even checked it out from the library, I most likely would have put it down and stopped reading a couple dozen pages in.

Then in Chapter 5, page 62, Omar, one of the characters, starts on a drive with someone from the Safe Lands. As the outsiders are brought into a new world, things picked up speed with near-perfect consistency (for the most part I only got bored during the drug benders (!) which struck me more like something from an after-school special). By the end I was flying through the pages and even interested to read the next book. But it was a a rough journey to get there. So I'll say 9/10 because about 1/10 of the book (maybe a little more overall) were difficult for me to get into.

Characters: 7 out of 10. At first, all the characters blurred together (and I thought several were rather dull), but throughout the course of the book they do start to get more interesting. Many of them have interesting traits, like severe (and heartbreaking) body image issues or an unhealthy obsession with ranch dressing, which I could definitely sympathize with. But other than those traits, I'm not sure I get the best sense of any of the characters.  Though given that the society is one of the major features of the book, the numerous points of view, and the broad, sweeping story portrayed, it's impressive that the characterization could be as deep as it is.

As far as the romantic elements of the characters, I found Levi and Jemma's Princess-Bride(!)-inspired romance so sappy that it made me squirm...and I read and write (speculative) Christian romance. I found Mason and Omar's feelings much more interesting (and even Jordan and Naomi's romance, and they were minor characters).

Writing/editing: 7 out of 10. At least two typos, and overall some of the sentences felt kind of stilted or awkward to me, like when a word is used twice in the same sentence.  I felt like this book could have done with one more round of polishing, but there may have been some sort of deadline involved.  Managing to create at least two different worlds (with varying degrees of success) and to tell a big story from so many points of view is a feat, which Williamson accomplishes impressively, if not perfectly.

Plausibility/believability: 3 out of 5. This is also a really tricky category. I didn't really "buy" the outsiders' world--there are complaints about having to work too hard, but they seem able to scavenge needed goods from other cities with little difficulty and even play "Old" video games and watch "Old" movies in the leisure time they evidently have. And they're all living like farmers, with a priority on marrying young to repopulate the world or whatever, but the average family size seems to be around 3 kids. (My mom was NOT from a farming family and they had 4 kids in the family...my dad, from a farming family, was the 7th SON, never mind the daughters!).  So their world didn't line up for me. Maybe they have infertility problems (the Safe Landers do) but I didn't notice any reference to that.

The entire overall premise doesn't make sense to me either--early on, it comes to light that the Safe Lands can (barely) afford to buy a healthy woman to bear children for them, but for some reason it seems to be equally difficult to come by the male "donations" necessary to get her pregnant? (So much so that they would use an infected male's donation?) I know in the modern world, it's way cheaper to get a male "donation" than a surrogate to carry a baby to term.

And in a world where uninfected males are rare and (apparently) necessary, why in the world would you kill any of them, regardless of their age or how annoying they are? And why would you not get as many "donations" as you could from each uninfected male (in case they slip up and get infected), instead of scheduling them at long intervals?

But all that said, once inside the walls of the Safe Lands, I got wrapped up in the world enough that I was mostly able to ignore those problems. The slang and technology of the world is pervasive and believable (Wyndos--glass that seems even more versatile than iPad/iPhone technology--are a nice touch). The TV programs are plausible and overall the level of detail is impressive. I had a few other problems even once I get into the world, but the story was moving along so quickly by that point, I overlooked them.

I'm not sure I can believe that human society would have changed in the way portrayed here, but it's at the least an exercise in "what if" that was interesting to follow.

Positive: 3 out of 5. It wraps up a lot neater than I was expecting, but it's not the type of book to leave me with a warm fuzzy feeling, either.

Gut reaction: 4 out of 5. I can't say this is a perfect book, given the issues I cited above, but it was interesting, compelling (once I got past the beginning) and made me want more, which is really all I ask for from a book.

Recommended for: Fans of edgy dystopian young adult novels. (I'm not a parent, but I'm not so sure I'd want my teens reading this, though.)

Tomorrow, I'll talk about the media in Captives.

Here are the tour participants!

*In conjunction with the CSFF Blog Tour, I received a free copy of this book.
Posted by Julie Bihn at 6:00 AM